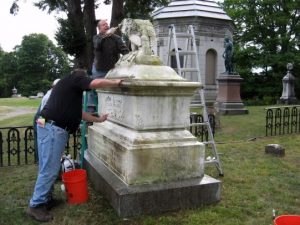 The purpose of the Department Memorial/Monument Grant Fund is twofold:

1. To assist Camps in their efforts to rehabilitate memorials and monuments related to the Civil War, Grand Army of the Republic (GAR), the Sons of Union Veterans (SUV) or the Sons of Union Veterans of the Civil War (SUVCW) and 2. to provide in-kind dollars that can be used to acquire grant funding from the National SUVCW or supplement that funding source.
This grant fund is open to the preservation and restoration of Civil War monuments and memorials as well as for the support of projects involving the production of new monuments. However, the funding priority always will be for:
1. the preservation of existing monuments 2. and specifically those monuments in the greatest distress.
Process: Requests for funds will be accepted after the annual Department Encampment beginning on 1 June of the Encampment year (year 1), continuing into the new year until 28 February (year 2). The grant committee is authorized to evaluate submitted requests and make recommendations for awards, through their chairperson, to the currently seated Commander. Recommendations must be submitted by 1 April in year 2. Awards will be made prior to the next Department Encampment where the appropriate announcement will be made by the currently seated Department Commander. The seated committee, the Commander and the Department are under no obligation to make an award in any given funding year if there are no proposals found to merit a monetary award. In the event of work delays, successive committees and Commanders are required to honor the decisions and awards made by their predecessors.
Note: Any requests that are made, and postmarked, after midnight of the 28 February submission date shall be held for consideration in the next funding cycle. The submission will be considered by the newly assembled committee and recommended to the newly elected Department Commander.

Guidelines: The following provides some general guidelines on how grant submittals will be evaluated:

1. Any New York SUVCW Camp in good standing may request money from this fund. 2. Having more complete information in the application/request will improve the possibility of funding. Providing photographs, explanations of work or unusual conditions, copies of all
1
Department of New York – SUVCW Memorial Grant Protocol V3.0
appraisals/estimates, and a bill of material (when possible) will help in the evaluation process of the committee.
NOTE: This fund will only pay for work to be completed and not for appraisals, estimates, surveys, etc., since these are considered a requirement of the application and describe the actual work to be done.
3. Each request will be reviewed on its own merit and completeness. 4. A Camp may only submit one request in any given funding cycle as described above. 5. Unsuccessful applications may be re-submitted one additional time. 6. The standard procedure will be to issue checks in the name of the vendor and deliver the check to the Camp when it is actually billed by the vendor. A copy of the final bill is required. 7. Funds up to a maximum $500.00 (Five hundred dollars) will be awarded per project. 8. The Department is not under any obligation to award the maximum amount in any, or all, cases. In addition, a submission does not guarantee an award of funds. a. Unused funds for the award cycle of the current year (year 1) shall be carried forward to the next award year (year 2); b. Funds carried forward (to year 2) may be used to increase a single award amount to $1000 OR may be used to make two $500 awards (in year 2). c. In the event that the larger award OR the duplicate $500 award is not made (in year 2) the unused amount will be returned to the Grant Fund and the funding amount resets to $500 for the subsequent year. The entire cycle begins again. 9. The review committee will consist of one Department Council member, the Department Treasurer and one “at large” member selected from the general membership who holds no other office at the Department level. a. The at-large member may be a volunteer; b. The at-large member may be an appointment by the currently seated, and duly elected, Commander. 10.Photo-documentation of the monument taken before and after rehabilitation is required and become the property of the Department of New York for use in support of this grant program in pamphlets, newsletter or websites of the Department of New York. 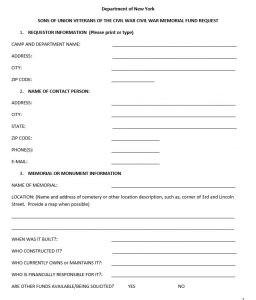 Send requests and associated material to: