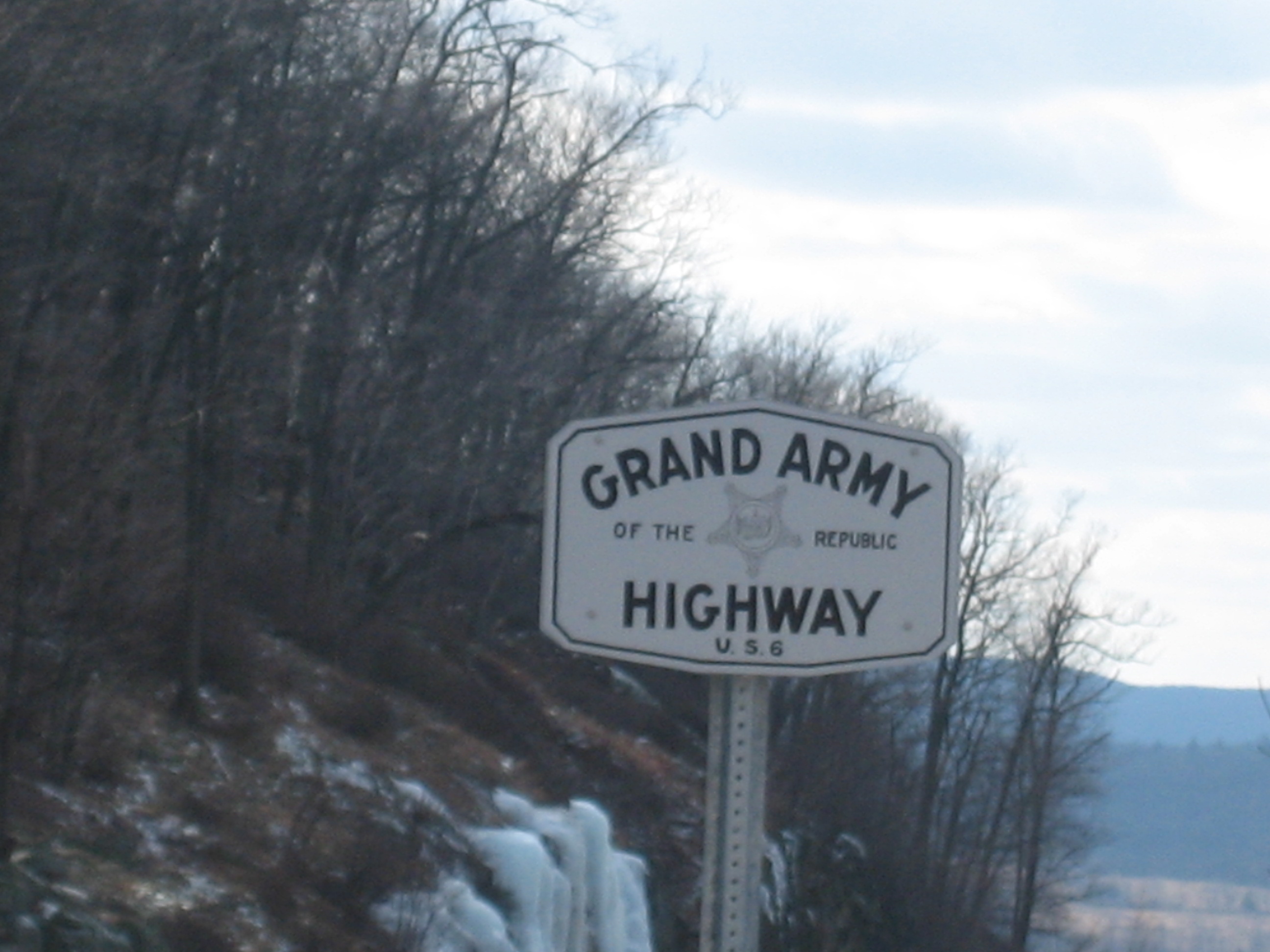 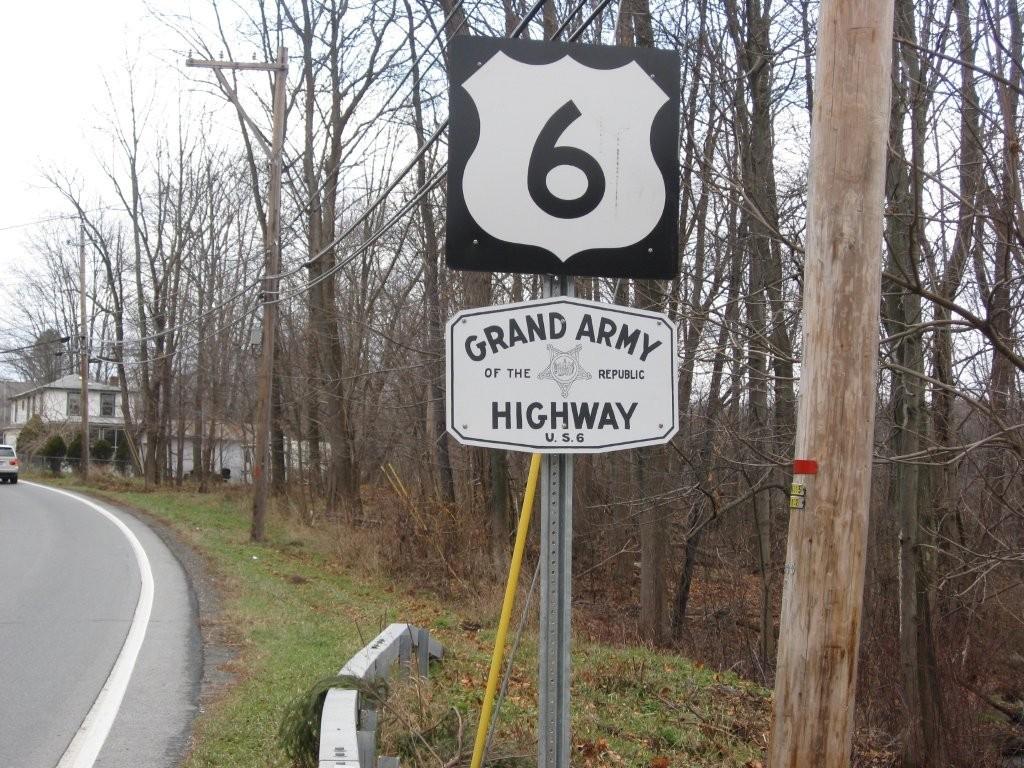 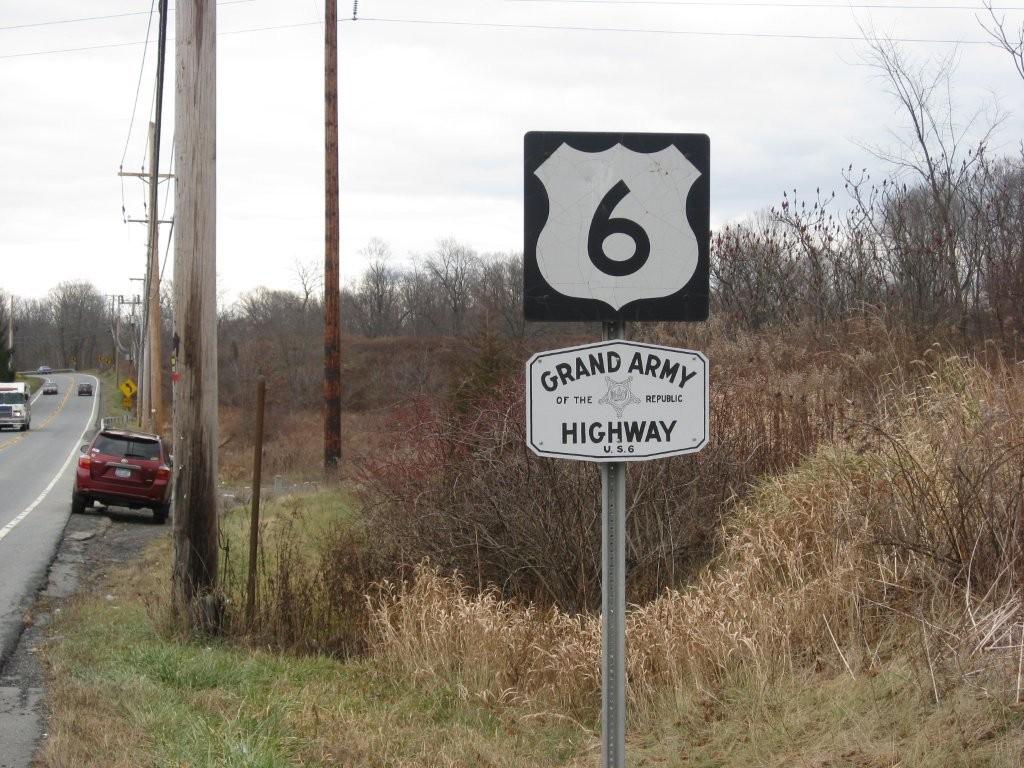 The Creation of the GAR Memorial Highway

The idea of the GAR Memorial Highway goes back to about 1934. At the National Encampment in 1936, it was proposed that US 6, which runs from Provincetown on Cape Cod, Massachusetts, to Bishop, California, be designated as the Memorial Highway. Because this highway passes through or near the metropolitan areas of New York, Chicago, and Los Angeles, as well as many small cities and towns, it is often called Main Street, USA. 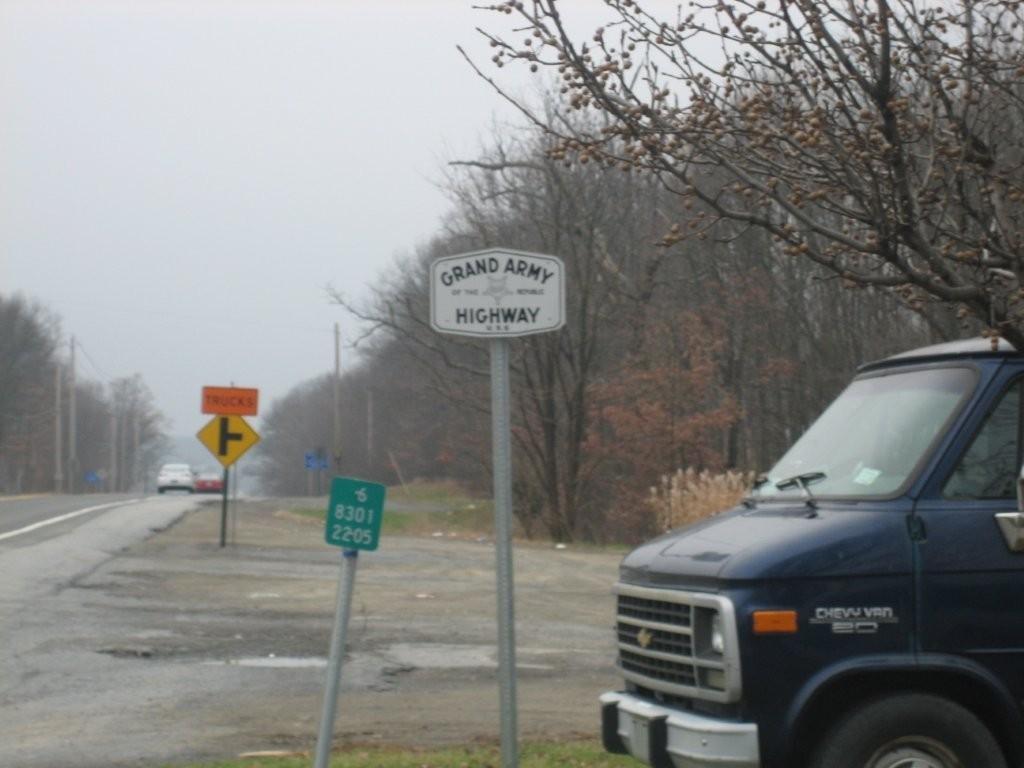 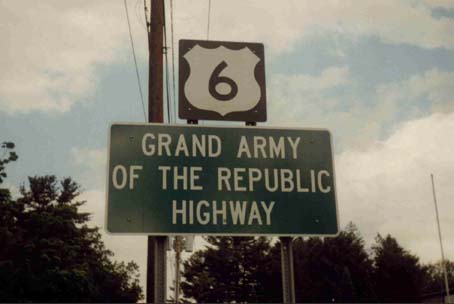 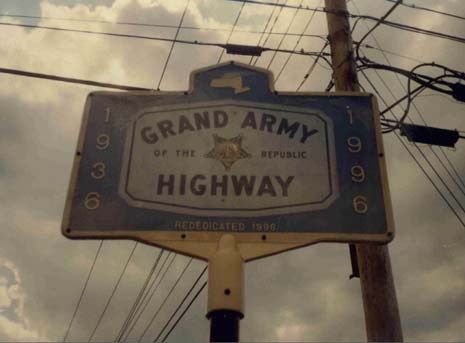 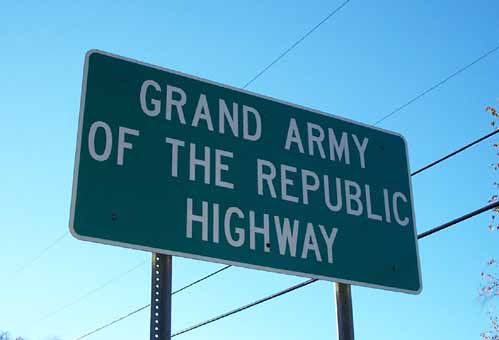 In 1937, the New York State Legislature passed, with the approval of then Governor Lehman, the law (Chapter 442) designating Route 6 in New York State as the Grand Army of the Republic Highway.

This was done:
“in grateful recognition of the valued services rendered
by the Union Veterans of the Civil War.”

Through Putnam County
“Quartermaster to the Union Army” 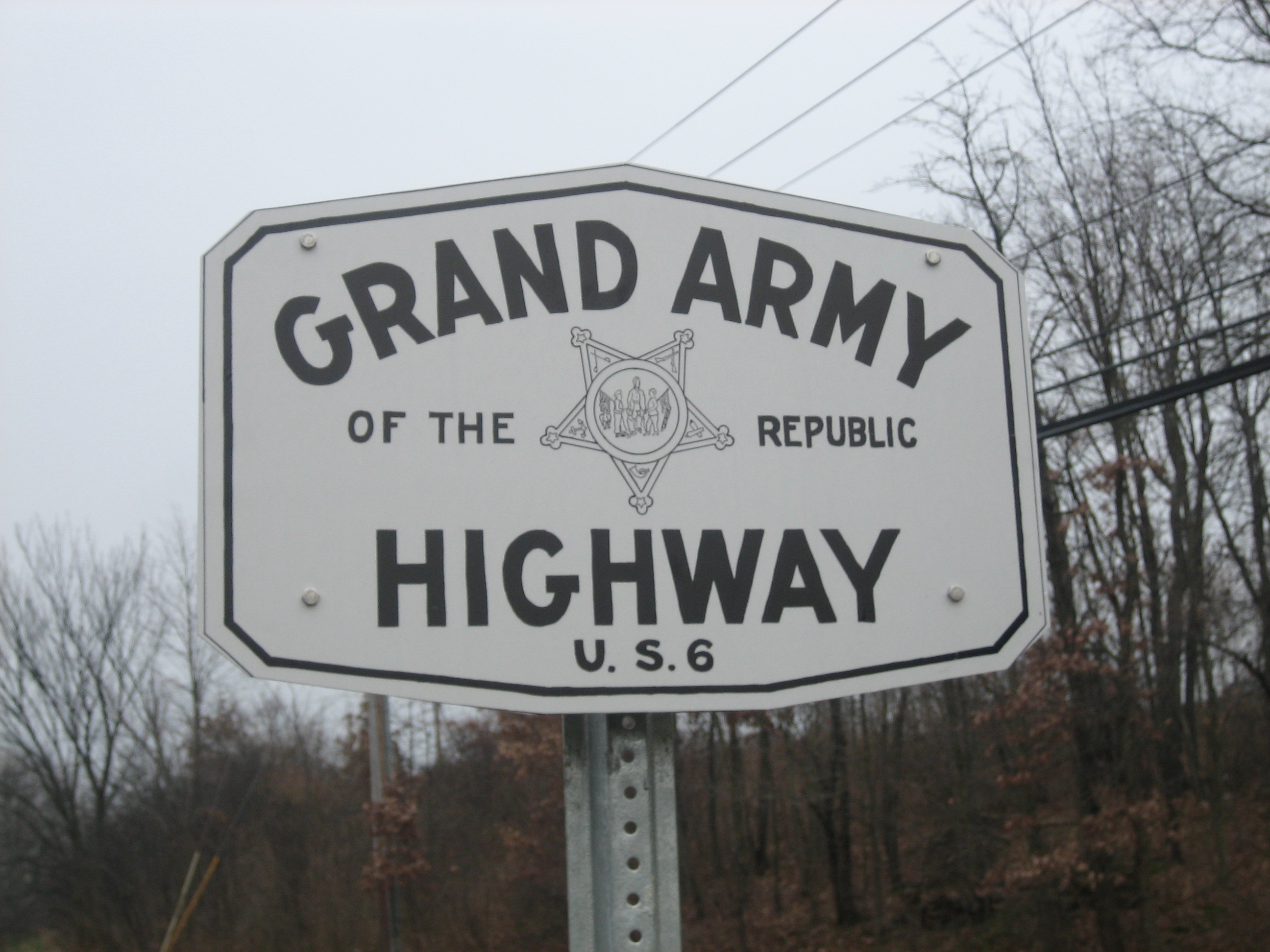 Traveling from east to west on the highway, you enter New York State from Connecticut near the village of Brewster. Although this whole area, over to the Hudson River, is on the northern fringe of metropolitan New York, and serves as a bedroom community to many workers f

rom New York City, it retains some of its old style as a vacation and farm area. Once a major dairy center, many of the farms were flooded to create the reservoirs which now provide water to New York City. In Brewster, the Borden Co. developed condensed milk which it canned and supplied to the Union Army. This was also a major iron mining area and, in the 1860’s, the Tilly Foster Mine was the country’s largest producer of iron ore. The production of this ore was of great value to the Union during the Civil War.
Tilly Foster, by the way, was a man. His given name was Tillingham. 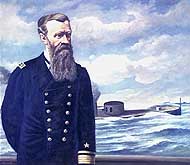 You can still see the vacation areas as you travel on to Carmel and Lake Mahopac. But today, more people live here year round than as summer vacationers. Going on to Peekskill, you come to an old Hudson River port. Abraham Lincoln spoke here on his way to his inauguration in 1861. Also, the abolitionist Henry Ward Beecher made his summer home here. A monument to Civil War veterans can be found just off of Main Street.  Rear Admiral John L. Worden the famous naval commander of the ironclad USS Monitor in its battle with the CSS Virginia (Merrimack) was born in Westchester County.

From Peekskill, Route 6 turns north into the scenic Hudson Valley, passing Camp Smith Military Reservation and onto the Bear Mountain Bridge. This area saw heavy fighting during the American Revolution.

Through Orange County
Home of the Orange Blossoms

Immediately to the north as you leave the bridge is West Point, military academy and training ground for many Civil War officers from both armies. Continuing on, you travel through Harriman State Park as you wind your way down the mountain. About four miles west, in Monroe, is Museum Village. This is a re-creation of a village as it would have been in the 1800’s. On the 1st weekend in September they usually hold a Civil War Weekend which draws hundreds of reenactors that provide an encampment and demonstration of Civil War life. beyond Monroe is the Hamlet of Sugar Loaf. Before the Civil War, this was a station on the underground railroad leading north to Canada.

The next Town you come to is Goshen, the Orange County seat. Many residents of Goshen, and their neighbors, played in important part in the nearby Battle of Minisink during the American Revolution. In the Civil War, many men from Goshen, and other Orange County communities, joined Units such as the Famous Tenth Legion (56th NYVI) , or the 124th NY Volunteers, better known as the “Orange Blossoms,” as well as other brave and heroic units. The present-day Orange Blossoms, a reenactment and living history unit, are also unique. Under the Militia Law of New York State, they are one of five statewide organizations recognized as Historic Military Commands. The 124th is the only one which depicts and presents the lives and times of the American Civil War.

It should also be mentioned that the Augustus van Horne Ellis Camp 124, of the Sons of Union Veterans of the Civil War, named for the brave Colonel of the Orange Blossoms, killed as he rallied his men during fierce fighting at Gettysburg in 1863, selected Goshen as its headquarters and meets the last Monday of each month at the 1841 Courthouse on Main Street.

Many men from the 124th, and their families back at home, helped to contribute to another fame for which Goshen is known: The Trotter. These horses, bred for harness racing, made Goshen the “trotting capital of the world.” The famous Hambletonian Stakes originated at Goshen’s Historic Track. And in 1873, President Ulysses Grant came to Goshen and watched the races from the roof of one of the houses on Main street, which was along the track. As a man who knew horses, Grant was reported to be pleased with his visit.

Continuing westward on Route 6 you pass Middletown where, in Hillside Cemetery, many of the Orange Blossoms and their comrades now rest. The scenery continues to change to a more rural setting with farmhouses and barns scattered about. South of the highway you have the famous “black dirt” country where onions are king.

Going onward, you arrive at Port Jervis on the Delaware River. At this junction, New York, New Jersey, and Pennsylvania meet. It is a gateway to the scenic vacation lands which surround it. In town is the park with the tallest Civil War monument in the state. It is also the park where Stephen Crane is reported to have sat on the wooden benches and talked with Civil War veterans about their experiences. From these talks, Crane gathered the information he would use in writing The Red Badge of Courage.

From Port Jervis, drive about 20 miles north and west on the Hawk’s Nest Drive (Route 97) and you will come to Barryville, in Sullivan County. Across the river is Shohola, PA, site of the worst train wreck in American History at the time of the Civil War. A train traveling to Elmira, NY, loaded with Confederate prisoners, had a head-on crash with a coal train. More than 76 men, both prisoners and guards, were killed. Hundreds were injured. Most of the victims were eventually removed to the National Cemetery at Elmira. But two confederate prisoners are still buried in the small graveyard behind the old Barryville Congregational Church. Surprisingly, no monument marks the actual wreck site. Only the memory remains.

From Port Jervis, Route 6 crosses the Delaware River and enters Pennsylvania. In the miles that follow, the Grand Army of the Republic Highway passes through Ohio, Indiana, Illinois, Iowa, Nebraska, Colorado, Utah, Nevada, and finally leads into California where it terminates in the community of Bishop, fewer than two hundred miles short of the Pacific Coast. Let us always remember that Route 6,
the Grand Army of the Republic highway, is more than just a roadway. It is named for, and forever duly honors those who fought to preserve the union of these United States, to see that this nation and this government of the people, by the people, and for the people, should not have perished from the earth.

“in grateful recognition of the valued services rendered by the Union Veterans of the Civil War.”

The information provided above
was assembled by Former National G.A.R. Highway Officer
and Past New York Department Commander
Cliff Henke