Rally Round the Flags Project 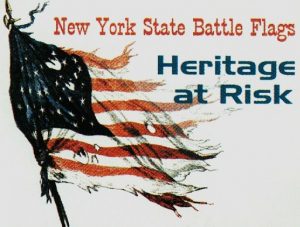 In its Fourth Annual Report submitted to the Legislature on February 11, 1867, would identify 811 flags within the collection. In 1881 to honor and display the flag in this vast collection, each was furled on its staff and placed in a glass case for storage and viewing at the State Capital. The flag collection would continue to grow, today there are over 2,000 military flags dating from the War of 1812 to present.

Nearly a century and a half of poor storage has subjected these flags to the harmful effects of humidity, light, gravity and temperature variance and today these glorious banners are in fair to poor condition. These flags will continue to deteriorate until they receive proper care and improved storage conditions Today, the New York State Military Museum administered by the New York State Department of Military & Naval Affairs is responsible for the interpretation, display, and care of the New York Battle Flag Collection. In 2000, the Military Museum in conjunction with the New York State Office of Parks, Recreation and Historic Preservation began work on the New York State Battle Flag Preservation Project. The projects goals are to implement a preservation program and create a flag archive for the conservation, storage and study of the Battle Flag Collection. Between 2000 and 2010 the States Parks textile conservators, with the assistance of a curator from the New York State Military Museum have, conserved over five hundred flags. Despite these efforts, nearly 75-percent of the collection (including about half of the Civil War flags) still awaits preservation and proper storage. With funding from the Governor’s Office and Legislature, has in that period of time invested over one million dollars in the Flag Preservation Project. Support, through public donations and the Flag Sponsorship Program have assisted toward the success of the Flag Project. 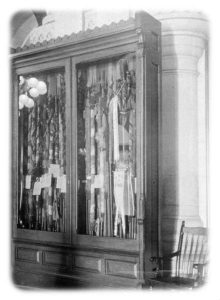 Over the last several years, funding for the Flag Collection Project has all but dried up due to state’s budget constraints. Now more than ever support is needed to continue and see this project through to its just conclusion. These sacred banners are now facing their most challenging battle that of time. Each year the flags that are still being displayed at the Capital suffer deterioration. Without state funding, the future of these patriotic symbols of sacrifice and devotion are in jeopardy. Now like our patriotic forefathers who rallied around the flag in defense of our state and nation so many years ago, we the Sons of Union Veterans must “Rally Round the Flags” and come to the defense of these precious treasures. What better way could we find to honor their memory than to work toward the preservation of these glorious banners?

Rally Round the Flags Department Resolution

Rally Round the Flags History