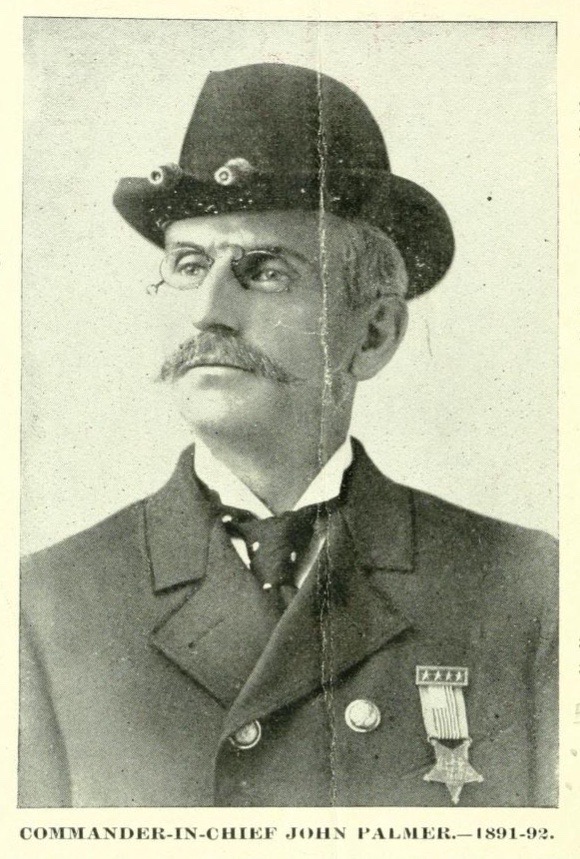 John Palmer was the 20th Commander-in-Chief
of the Grand Army of the Republic.
He enlisted September 10, 1861 as a Corporal
in Company B, 91st New York Volunteers. His
father and brother were also in the Civil War.
He was wounded in battle April 1, 1865 and
after the war he returned to Albany. He was a
Charter Member of Post No. 5 and was the
New York Department Commander in 1875.
When he was Commander-in-Chief of the GAR
he marched at the head of a column of 80,000
veterans in the nation’s capital at the 26th
National Encampment.
He was Secretary of State of New York State
from 1894 to 1897 and helped establish the the State Soldiers Home at Bath, New York.
He died at his home in Albany on April 15, 1905.

From Albany City Historian Virginia Bowers:
Hon. John Palmer, Secretary of State, is a son of John who died in the Civil war in 1863. He was
born to English parentage in Stapleton, Staten Island, N.Y., March 22, 1842, and in 1843 went
with his parents to England, were he lived ten years, two of which were spent with his
grandfather on the Black Sea, where he witnessed the siege of Sebastopol. He spent three years
in a semi-military school near Liverpool and in 1853 returned with the family to America and
learned the trade of fresco painting, meanwhile finishing his education at Bryant and Straton’s
Business College in Albany. September 10, 1861, he enlisted as a private in Co. B. 91st N.Y.
Vols., was commissioned Captain March 1, 1865, and mustered out with the regiment July 3,
1865, being brevetted Captain N.Y.V. His first service was in the Department of the Gulf, where
he displayed great bravery at Port Hudson in the River Campaign. He was afterward transferred
to the Army of the Potomac and at Five Forks received injuries from a falling horse, from which
he never recovered. In 1865 he resumed his trade as a painter and a frescoer, in Albany, which he
has since followed. In 1866 he became a Charter Member of Lew Benedict Post No. 5, G.A.R.
and in 1875 was Department Commander. He was elected Commander-in-Chief of the G.A.R. in
1891, when he led a column of 60,000 veterans through the streets of Washington. He was
prominent in the erection of the Solder’s Home at Bath, N.Y., and is President of the Board of
Trustees and has been indefatigable in promoting the interests of veterans of the war. He has
always been an active Republican, casting his first vote for Lincoln in 1860, and in 1893 was
unanimously nominated by his party for Secretary of State and elected over Cord Meyer, a
Democrat, by a 24,484 plurality. In 1895 he was re-elected to this office over Horatio C. King
by a majority of 90,146.
In 1867 Mr. Palmer married Maggie Moore of Albany and they had one daughter and three sons.
Mr. Palmer died at his home on Madison Ave, Albany on April 15, 1905.