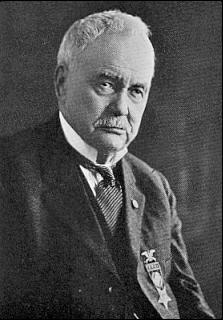 James Tanner, the 36th Commander-in-Chief,
was born in Richmondville, N.Y., April 4, 1844.
After attending district school he took a course
in a business school, later becoming a
schoolteacher.
He enlisted at the call for volunteers in Co. C,
87th New York Infantry and was promoted to
Corporal. He participated in the Seven Days
Battles of the Peninsular Campaign and, in the
second Battle of Bull Run, was severely
wounded in both legs and, on the battlefield
under fire, they were both amputated. After
several months in the hospital he was finally
discharged.
In 1865, when a clerk in the ordnance bureau, he was called to take the first testimony of the
assassination of President Lincoln at his death bed. Later he served in various positions in the
State of New York and in other government positions, among them Deputy Collector for the
Port of New York and Pensions Commissioner. In 1904 he was appointed Register of Wills for
the District of Columbia, a position which he held until his death.
He joined U.S. Grant Post in Brooklyn, N.Y. in 1869. He was the New York Dept. Commander
from 1876 to 1878 and was instrumental in the start of the Soldiers Home at Bath, N.Y. He
served as Judge Advocate General in 1892-93 and again in 1903-04, and was elected Commander-in-Chief in 1905.
He was also a director of the Red Cross for many years. For 51 years he attended National
Encampments and was living example of a great American. Corporal Tanner, as he was always
called, passed away October 2, 1927 in Washington, D.C. and is buried in Arlington National Cemetery.