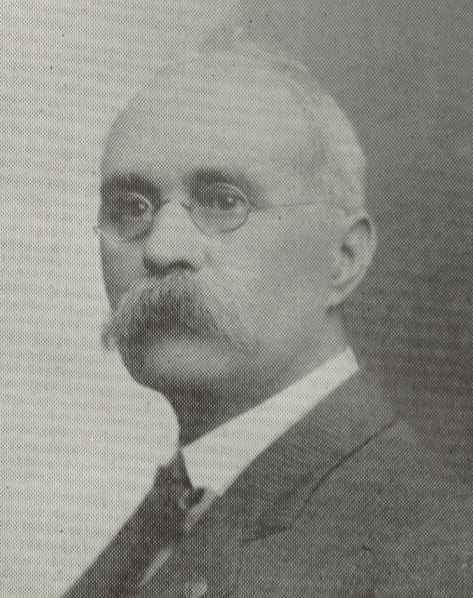 The Last Year of the New York Department, G.A.R.

James A. Hard was born at Victor, New York
on July 15, 1841. He was the son of Alanson
Pratt and Martha Frost Hard. He was the third of
13 children and survived the entire family.
In 1949, at the Grand Army of the Republic’s
final National Encampment, James Albert Hard
was the last living veteran of the Civil war in the
State of New York. At 109 1/2 years of age he
was both the oldest living Union veteran and the
oldest member of the Grand Army of the
Republic. Although blind, he served as both the
New York Department Commander and the Jr.
Vice Commander-in-Chief of the G.A.R.

Mr. Hard began as a government railroad worker. Thereafter, he engaged in carpenter work for a time. Finally he became a notary and had a flourishing pension business continuing in the same
office for 38 years. As a young man he worked on farms. He had very little schooling.

He settled in Rochester in 1882 which has remained his permanent home. While very young he moved from his birthplace at Victor, NY to Broome County, Windsor, NY.

At President Lincoln’s first call for volunteers he enlisted at Dryden, NY on April 18, 1861. He
served in the regular Army for 2 years and thereafter engaged in government railroad work until
the close of the War. James A. Hard served in Co. E, 32nd NY Volunteers.

He met President Lincoln twice. Their first meeting was at a White House reception at the
outbreak of the war just after his enlistment – before he had been issued a uniform. As he
approached Lincoln the President shook his and and said, “Well, son, you look like you would
make a good soldier, why don’t you join up?” His second meeting with Lincoln was at
Bailey’s Cross Roads when Lincoln was inspecting troops, at which time he again shook hands
with the President. He also once shook hands with General Grant.

During the Battle of While House Landing, on the York River, his Commanding Officer, Capt.
LC Grown was killed besides him. He took part in the battle of Fairfax Court House,
Blackburn’s Ford, Bull Run, Munson’s Hill, Bailey’s Cross Roads, 2nd Munson’s Hill, and
Annandale – all in Virginia in 1861. In 1862 he fought in the battles of West Point, The Seven
Day’s battle of Virginia, Gaines Mill, Garnet’s and Goldings Farm, Glendale, Malvern Hill,
Crampton’s Pass – again, all in Virginia, as well as Antietam, Maryland. In 1863 he took part in
the battles of Fredericksburg, Franklin’s Crossing, Mary’s Heights and Salem Church -once again, all in Virginia. Hard served through the war as a Private.

One of Mr. Hard’s maternal uncles served in the Revolutionary War. In WWII he had a
Grandson, Earl H. Osborn, stationed at Aberdeen, Md., a Great-Grandson, James P. Eksten,
with a medical detachment of the 133rd Inf. in Africa and Italy, and another a Great-Grandson, Donald R. Nelan, with the Air Corps over Germany.
James A. Hard attended the last encampment of the NY Department, GAR, in 1948 and of the
national organization in 1949. He was the only veteran at the State Encampment and only 1 of 6
at the last National.

When he died on March 12, 1953 he was given the City of Rochester’s version of a State funeral.
Thousands lined the streets of Rochester to say good-bye. The City Hall bell tolled 13 times. It
was the first time since V-J Day that the bell had sounded. He was laid to rest in Mt. Hope
Cemetery next to his second wife, Anna, who died in 1929.

The James A. Hard Story

by James A. Hard

My father was Alanson Pratt Hard, who lived in Rochester before it became a city in 1834. And
my mother was Martha Frost Hard, who was born in Rochester.

My father was a stage driver in those days. He used to drive the stage to Mt. Morris and to
Canandaiqua. When I was just a couple of years old, he gave up driving stage and went to
Albany on the canal. Then he bought a farm at Windsor. That’s in York State down near
Binghamton.

That was where I grew up. Life was much harder in those days than it is now, but we had a lot of
fun. There were three brothers besides me and five sisters in the family. I was next to the oldest,
one of my sisters being older than me.

We used to all help with the farm work. I think I started when I was about five years old. It
wasn’t a big farm, but there was always plenty for us to do. We had about eight or ten cows.

I was six when I first went to school. I can remember very clearly the first day I went. My
mother dressed me up one day without telling me why. I asked her and she said, “Son, your’re
going to go to school to learn you ABC’s”.

I well remember the teacher that taught us. He took quite an interest in me and he used to let me
sit up on his lap while he taught the class.

But I never did go to school full term. There was always work to do on the farm and my father
used to send us to help out the neighbors when they needed us.

He had a great deal of enjoyment although things weren’t as easy as they are for the children
today.

In the winter, the Susquehanna River down there used to freeze solid for seven or eight months.

In the summer, there were dances in the towns and we used to drive to them with my sisters. My
dad had a pump organ put in our house. My sister used to play it. They were right fine
musicians.

To show you how things have changed, we used to think it was a wonderful Christmas if we got
a doughnut and a stick of candy and a few nuts of some kind.

Our favorite holiday was the Fourth of July. When I was 13, my brother and I walked to
Binghamton, which was about 14 miles from home. They had advertised a big Fourth
celebration.

My brother and I got up at 3 a.m. on the Fourth and ate breakfast. We went outside and the
ground was white with frost. My father gave us each a shilling (12.5 cents) and we started
hoofing it to Binghamton.

We got to Binghamton about 9 a.m. and we were so hungry we each bought a great big
gingerbread cookie for three cents. We stayed all day, window-gawking and seeing the sights.
There was a fireman’s parade, which was the best thing of all. About 9 p.m. after the fireworks,
we started home but we only got about 6 miles when we went into a barn and took in a snooze.

We didn’t wake up ’till the middle of the morning. Then we went home. It was the most
wonderful time boys ever had.

I quit school when I was 16. I only learned arithmetic, reading, writing and spelling in school.
Schools weren’t so good then as they are now, but I think we grew up more quickly and were
more independent than boys and girls today.

I was working at a sawmill at Jordan, that’s down near Syracuse. One day a lot of fellows came
by in a wagon. They were making a lot of noise and they stopped at the mill.

When I asked what all the racket was about they told me the President had issued a call for
volunteers and they were going to enlist.

Well, I joined them and we all went down to Dryden in Tompkins County and enlisted in the
32nd New York Volunteers for two years. The Company stayed there in Dryden for a few
weeks. We didn’t have any uniforms but we did what drilling we could.

Then we got on the railroad cars and went to Staten Island and then to Washington. We rode in
freight cars. It was hot and dirty in the day and cold at night.

We stayed in Washington several weeks. It was then that I met President Lincoln the first time. It
was in May, 1861, at a reception in the Blue Room in the White House.

I shook hands with Mr. and Mrs. Lincoln and little Bobby Lincoln. We hadn’t got our uniforms
yet and Mr. Lincoln said, “Son, you look as if you’d make a good soldier. Why don’t you join
up?”

I explained to him I was in the Army, and I don’t remember what he said. But he gave me a smile
I always remembered. Whenever he spoke to anyone he had a wonderful smile.

And he gave a handshake with a grip that nearly crushed my hand. I thought his hand was as big
as a ham, it took mine right out of sight.

I remember looking around the White House. There was a guard in every room, but they let me
see all I wanted because I had a military pass.

In June, I think it was, a rebel shot one of our Colonels in Alexandria. The Colonel’s name was
Ellsworth. They were afraid there might be riots in Alexandria as there were a lot of the Secesh
(Secossionists or Confederate sympathizers) living there, so we were sent over to keep things in
hand. We stayed there all through June and July until just before the Battle of Bull Run.

We lived in big tents which had eight or ten bunks in them. The weather was pretty good and we
didn’t have such a bad time. That was before the fighting started.

They told us the meat was salt beef or salt pork but we called it salt horse. I know the___ in the
meat weren’t beef or pork ribs. I can still taste the beans we had. They were big white beans. A
lot of the time they weren’t cooked so good and they were tough, I can tell you. When we
wanted something good to eat or some tobacco, we’d go to the sutlers. They used to have
wagons or shacks near the camps to sell their things.

I got passes now and then and I use to go to Washington. I got to know the city very well. It
was quite exciting with a lot of soldiers about, and a lot of things going on.

The discipline in camp was pretty strong, a lot more than it is in armies nowadays. They used to
punish deserters and such by hanging them up by their thumbs or by making them ride barrels.

The only time I got punished was one day when the Order Sergeant was imposing on me. I said
something back to him.

Well, I got sent to guardhouse. The guard told me to go out and pick up a rail and march around
with it on my shoulder. I picked up the smallest rail I could find but the guard found a heavier
one and said, “Here, you, I’ll trade with you”.

I had to carry the rail around until the officer of the day came along. He said the Sergeant was
wrong, but that I shouldn’t have talked back to him. Then he sent me back to my quarters.