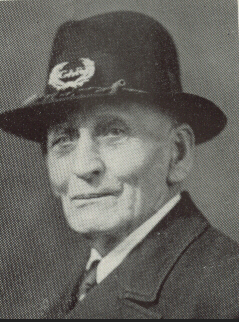 Edwin Morris, the last Civil War veteran in
Chemung County, Commander and sole
surviving member of Baldwin Post No. 6, heard
his Supreme Commander’s call May 23, 1943.
Commander Morris suffered a heart attack on
Appomattox Day, April 6, 1942 and never fully
recovered. Although urged to forego his
customary participation in the annual Memorial
Sunday service of Baldwin Post because of his
condition, Mr. Morris gave the address of
welcome at the ceremonies Sunday morning at
the Centenary Methodist Church. “It is my duty
to my dead comrades to take part in the
service.” Thus in one of his last utterances,
Mr. Morris summed up his belief of many years.
Mr. Morris was born at Athens Township, Pa,
January 8, 1847. He enlisted in the Union Army
in November, 1863, at the age of 16 against his
father’s wishes. A member of Company D,
179th New York Volunteer Infantry, he fought at
Petersburg and all the battles of the Potomac.

He helped defend Richmond and was present at General Lee’s surrender at Appomattox Court
House, standing only a few feet away when the sword was passed from Lee to Grant and back
again. For many years, Mr. Morris considered himself one of the best horsemen in the section,
at one time having a stable of 127 head which he trained for riding and racing.